go back to BOARD MEMBERS »

Grown up in Rödermark near Frankfurt, Jürgen Franz got his first lessons in the age of 12. He was a «young-student» in the Dr. Hoch's Conservatory Frankfurt and started his studies at the Musical Unsiversity Frankfurt. Jürgen Franz changed to Stuttgart where he studied with Jean Claude Gérard. Further studies brought him to Maxence Larrieu and  James Galway  who had both a  great influence on Jürgen Franz.

The Flutist also was a member of the Richard Wagner Festivalorchestra in Bayreuth with Conductors like Christian Thielemann. Lorin Maazel invited Jürgen Franz to play as soloflutist with the orchestra  «Symphonica Toscanini» and than he played regular with this orchestra on tours all over europe.

He has been a guest in CD and radio productions and as a soloist, he toured through Germany, France, Japan, Estland the USA and Switzerland.

He plays concerts with Maxence Larrieu, Davide Formisano, Hening Lucius and is a frequently seen guest at  the European flute festivals. He has played all sorts of solo and chamber music literature, mostly with guitar, piano, organ, strings and orchestra.

His Solo CD´s are highly recommend by musicans like Jean Michel Damase  or Sir James Galway:

«This CD (European Recital) is one of the most interesting to be issued for a long time. The repertoire is very attractive. It is very well recorded and the playing is of the highest standard. A pleasure to listen to.»

As a teacher Jürgen Franz is Professor at the Musikhochschule Hamburg and at the Hamburger Konservatorium. He teaches masterclasses in Germany, China, Spain, USA and Japan. 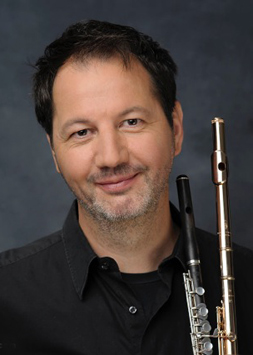